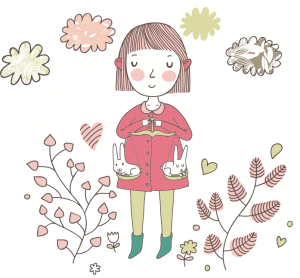 Deep down, this child is more focused on others. He needs and searches for a lot of contact with others. On his own, he can be somewhat unsure of himself even if this is not immediately apparent. This does not mean that he runs the risk of being incapable of life. No, he can, very well, make decisions alone and act independently. He simply prefers not to do this as he likes to include his surrounding environment when making decisions. He can only really be happy when the person he cares about most is also happy.

Even as a small child, he is happiest when he is surrounded by others. He will not want to miss a thing! This child will never want to fall asleep on his own, he will prefer to be carried around and have a chance to observe everything around him. The little Libra smiles and shines at everyone and constantly tries to make contact with others. He likes to play with others, in pairs or in a group. He usually adapts to his playmates and adjusts himself to the group, which does not matter to him, because the main thing for him is to be able to socialize and have fun playing together. Sometimes he forgets himself too much and does not express his wishes; as a parent, you can teach your child that there is nothing wrong with expressing your own wishes and desires.

The growing Libra is almost always exemplary; he can participate early on in all social events and is often the pride and joy of the family. Even in puberty, the young adult rarely causes difficulties and is practically never rude or mischievous. In fact, he has no problems with growing up; on the contrary, he has a very natural way of dealing with himself and rejoices at his increasing maturity. However, this child also needs to learn how to plan his life and make decisions about his education or career. Show him what opportunities are available to him so that he can have a better guide of where his strengths are and what his calling may be. This will help him to better orient himself and define his goals.

Since the young child has a hard time being alone, he will allow himself to enter into his first relationships in order to always have company and not feel so alone. This approach can lead to unsatisfactory constellations, as he quickly realizes that some interpersonal bonds do not work as well as he had initially hoped. Then he will not dare to end the relationship because he does not want to hurt his partner. This can leave him feeling unhappy.

Through his respectful, social, friendly, and sensitive nature, he is often the mediator in his circle of friends. He quickly detects conflict situations and can intervene and settle them diplomatically without hurting others. Zhis child will be successful in social or health professions. He can also go far in politics if he works on his self-confidence.

The young Libra always wants to do right by everyone and to not cause any unrest, especially with regard to his parents and his family. This is why he sometimes finds it difficult to make quick and important decisions. He will try to not only consider his own priorities but will also want to consider the wishes of everyone else. This will lead him to often decide against his own wishes, and instead, make decisions based on what every else wants. He does not want to hurt, neglect or favor anyone. It may take a while before he has found the right path for himself. Show your son that you still love him, even if he behaves selfishly when making decisions. If you do not, he will have a hard time breaking free of this behavior on his own.