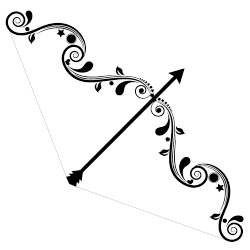 This child is open to the outside, enthusiastic, tolerant, friendly, and balanced. This very positive appearance of him means that other people also approach him in an open, communicative, and positive way. He has that certain something which makes it relatively easy for him to achieve success without having to exert himself too much.

The appearance of this child generally has something honest and upstanding about it. This, however, does not always match up with his inner constitution. This pleasant and social image is the key to his increased success in life. However, over time his inner self will become visible to others, which can sometimes contradict his image.

As an infant and toddler, little Sagittarius is more of a restless child. As a parent, you will suffer from your child’s poor or lack of sleep. As early as kindergarten and also during elementary school your child will stand out as someone with “ants in his pants” accompanied by a difficulty in concentrating. Since he is incredibly inquisitive and curious, he will be able to make up for his restless behavior and still manage good grades – not least because of his active participation in class. You will not be able to get him to quietly do arts and crafts – he has to move around, be outside and should start with various forms of sport at an early age.

The youthful child will always be on the move, often with one or more of his many friends – rarely with very close friends – and loves travelling and adventure. He will happily continue the sports activities he did
as a child into older age. He is an optimist and will not be struck down easily by difficult situations. What’s more difficult for him is to enter into a lasting and close partnership.

This child has learned through observation that you, as his parents, encourage and reward expansive, conquering, tolerant, and ethical behavior from him. He shows these traits more and more clearly to gain your increased affection and attention.