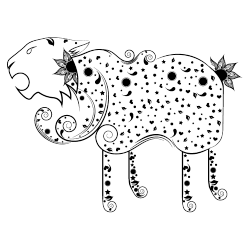 Deep down, this child is confident, independent, and self-centered. He automatically assumes that he holds claim to a special position in life. He will also simply take this special position and will not worry too much about having to push others aside in order to get there.

As a parent, you should sometimes intervene with correction, but in a way that your child does not feel like his dignity is being attacked. You must or should appeal to his social responsibility for he will always try to act honorable and chivalrous. It is not in the nature of your child to knock down or harass weaker individuals. Still, he loves to blow his own horn and get into honest disputes.

Little Leo seems almost inexhaustible. He is already awake before dawn and is happy and ready for new activities. He loves to put on a show as a baby. He will laugh, be loud, hit the ground with spoons or blocks and generally keep the whole family entertained. The little child can become furious when his performances are not properly honored, or even admonished with requests to be quieter. This will hurt him in his pride, cause him to shake his mane, roar and walk away feeling deeply insulted.

In the group this child practically always assumes a leading position – either he is the chief, king or group leader. It can happen that he exploits his dominant role and becomes a bit of a show-off or overbearing. When this happens, he must be cautiously brought back down to earth. He will develop strong leadership potential and skills. As a parent, you should pay attention to the fact that your child has a solid base of knowledge that justifies these tendencies as he can sometimes come off as a know-it-all.

The growing child will busy himself a lot with his outward appearance. He loves to look in the mirror for hours, to try out new looks and hairstyles, and to get compliments due to his appearance. He is incredibly vain as a teenager but also knows how to put himself in the right light so that he can be proud of his appearance. As an entertainer, he will also be successful – he loves storytelling and likes to gather many listeners, which he can captivate to the very end of every story. In love, the young Leo will have a hard time finding the right partner. Only once he has fallen “head over heels” for someone will he enter into a committed relationship. Watch out if he is disappointed in this regard! In this situation, his pride will be deeply hurt.

This child will always have many friends around him because, even if he sometimes tends to exaggerate and has a hard time dealing with criticism, he is too happy and optimistic to be angry for a long time. After an argument or dispute, all troubles will be quickly forgotten since he practically never holds onto a grudge. He loves life and pleasure. It is hard for him to learn to keep up with his money. As a parent, you should give your child a regular, small allowance and help him to manage it. Otherwise, he may have a hard time holding onto his money later in life.

The child has an outstanding vitality and health. He is rarely sick at all and even if he really catches something, {:NAME:} is quickly back on his feet and cannot wait to get out of bed. As a parent, make sure that he gets enough rest and takes time to recover from stressful activities and also from childhood illnesses.